In Gamesh's Log you will learn key revelations about Earth's political history through one of Gamesh's journal entries. This story is a segue between Gamesh's first tale (Pirates vs. Ninja) and his next adventure (Shadow of Light). 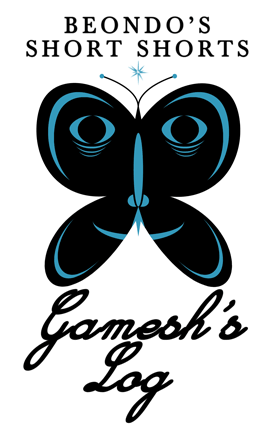 This seems so silly to me, but Waylien says that it is important for my growth. I just don't understand how writing to one's self is beneficial. I am sure Waylien knows what he is talking about though; he is after all, light years ahead of me intellectually. Being in close proximity with him since we left Terah has given me a chance to observe him to great extent. He is such a curious being. I understand now that he is not entirely a life form, at least not as I understand life forms to be; yet, he is just as alive as I.

I am finding out that there is so much that I do not understand about this universe. Waylien says that is to be expected. My mother was only able to teach me so much; for fear that too much knowledge would have prevented me from living a normal life. Ha! As if a normal life was even possible for me. I was born into royalty and my mother was not from my planet; better yet, she was revered as a goddess by many. What chance did I ever have at a normal life?

Waylien assures me that I will be able to bring myself up to speed in time. He has even promised a tool to help me absorb information faster; a neural interface I believe he called it. I hope that he is able to build it quickly, my studies so far have been very daunting--math, sciences, philosophies, histories, languages--it is a lot to take in. History alone is a seemingly infinite wealth of knowledge; multiple planets, each with multiple cultures, and competing variations of recorded accounts. It is hard enough to know everything, let alone know which version of truth is correct.

I decided to start off with my mother's world and its histories, Earth (that is after all, my destination). After reading a concise history of Earth, Waylien encouraged me to begin delving further into specific aspects of Earth's history. The rise and fall of the United States of America was an easy choice for me; it hit close to home, given my mother's efforts to bring democracy to my people. Once a strong nation with a democracy that was the envy of many, the Americans seemed to destroy themselves from within.

According to my readings, the original tenants of "power by the people" were slowly eroded over time, as the wealthy began to seize more power for themselves. I can understand why those men would take such action, greed can be a powerful motivator; but why did so many people go along with it? When these first steps were taken to strip the people of their power in the democracy, why did so many Tea Party supporters seem all too eager to support it?

It just does not make sense to me.

The smaller government movement in the early twenty first century seems to be when the slippery slope began. As the Tea Party movement took root and the power of government was diminished, the rift in the United States was pushed to the breaking point. Democrats and some Republicans were forced to stand against the lunacy. If only their efforts had succeeded.

The Civil War of 2031 was not avoidable at that point. With the Southern and Midwestern states combining forces against the Western and Northeastern states, war stretched between the shores. That would be like all of the people on Terah breaking out into war. Millions died, some to defend their rights and others to take away their own rights.

America quickly established a new form of government that was controlled by business. Instead of having three branches of government, there was now only two (Administrative and Judicial). The head of this new government was put into power by a vote of the top public and private businesses in the country. Their processes of selection were never known, only the results.

The first thing to occur was the eradication of all social services and many laws. The land of the free was now a little freer; at least it seemed that way for a while.

Soon after the fall of American Democracy, other nations followed suit. Some were via wars, while others were simply the result of public approval. According to this text, there were massive campaigns to "educate" people around Earth about the benefits of the new government that America had established. Those campaigns (and wars) where obviously very well financed, thanks to the business sector. By 2040, there were no remaining democracies on Earth.

After the remaining democracies fell, reality began to set in, in America and elsewhere around Earth. The notion that they had gained more freedom was eroded into dust. Instead, they received a smaller government that was outright controlled by the very same business leaders who were funding the smaller government movement. Those men reshaped the country in their image and called themselves "The New Founding Fathers".

Christian beliefs were forced on everyone; those that failed to conform were sent to prison. Education was diminished, so that the people only received enough to serve in the role that was assigned to them from an early age. Guns were outlawed completely, except for security forces.

Even business was at first given free rein to operate in any manner necessary to increase profits. That situation changed fairly quickly, as businesses were increasingly forced to operate as those who controlled the new government saw fit. Simply put, if you were not at the top of the new power structure, then you were at the bottom.

Free media was another fatality of the sweeping reform, as it was turned into a state run operation.

The democracy that once was, had been reduced to a totalitarian state. Instead of "The Land of the Free", it had become the land of the controlled. The movement for smaller government had manifested itself as the movement for a larger more invasive government. The same was true for every nation on Earth.

As the dust settled and the road forward began to emerge, reality set in. Power was now in the hands of the businesses of the world. Governments around the globe were solely managed by the top businesses of those countries; businesses had to meet a list of criteria in order to be determined "large enough, to have a say".

On the flip side, war eventually became a thing of the past. With a well meshed global consortium working together and the elimination of countries too small to have a say, there was no cause for war. In addition, crime was reduced significantly. With the near elimination of privacy in the new world, it was difficult to get away with anything.

According to my readings, individuality began to decrease as time wore on. Housing became very standard around the globe, with every family receiving a set amount of space. Public transportation was required for the working class, making it more difficult for people to travel outside of their home range. Not that they could have otherwise, given their salaries were constantly kept at the lowest possible point; only affording people the ability to eat and spend some money on consumer goods.

Additionally, people lost the ability to pursue their own professional interest. A new government department was established worldwide that determined the best profession for an individual and then placed that individual in said profession, at which point the individual would be given enough training to do their new job.

To me this seems like a very bland way to live. One of the aspects that I enjoyed as I traveled The Road, was seeing the different cultures of Terah; each culture had its own interests and quirks. For an entire planet's population (one much larger than Terah's), to become so similar; it just seems like a waste of potential.

I can see pros and cons to Earth's current governing structure. There is definitely a greater structure to ensure peace and order and Earth has continued to prosper as a whole. On the other hand, there was a definite loss of culture and individuality. Which side of this coin is more important, security or freedom?

I don't think that I know the answer to that, but I do believe that Earth's leadership has gone too far.

These were obviously concerns of my mother as well. She went through a great deal of effort to bring my people democracy. But what was her end game?

Waylien has told me already that all would be revealed to me in due time; but it seems like the more I learn, the more questions I have.

I suppose I will just have to wait and see.

To the future I go!