Life and Times of Synthetic Bacteria

In Life and Times of Synthetic Bacteria you will follow synthetic bacteria as they carry out the mission they were designed for. This short, takes place during the events of Shadow of Light and it is recommended that you read Shadow of Light first! 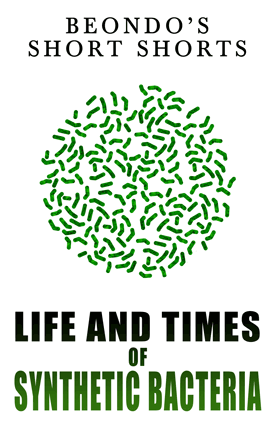 Internally, its bioelectronics systems were constantly checking data from its geo-location module. Once the hummingbird was near its target location, it broke into a dive towards a group of trees located just on the edge of the target location. Inside the safety of the tree cover, the hummingbird began to slow until it came to the tree line and it then began to hover while identifying a suitable branch to position itself.

Once a suitable branch was determined, the hummingbird made its perch and then opened its beak. Immediately, a swarm of artificial gnats flew out of the hummingbird's mouth and flew towards their assigned patrols. The gnat's mission was simple, patrol and make contact with every living thing that comes into their patrol zone.

The gnats patrolled for several hours until the first target entered one of the patrol zones, a squirrel. The gnat in that zone made contact, as it was programmed to do; the gnat's sensors determined that the creature was not a human, so it then returned to its patrol. It was several hours more until the next contact was made. This time it was a man who was just getting home. The gnat in that zone made contact with the man, this time it stayed put for a short while. Sensors on its legs determined that the contact was human; the sensor also determined that no bacteria with active biomarker was present. This in turn, resulted in a signal being sent to dispensers in the gnat's leg to release a small culture of synthetic bacteria onto the human.

The gnat then returned to its patrol.

The next morning the human left his house and started to walk towards his vehicle, when another gnat made contact with him, again not detecting any bacteria with biomarker activated, the gnat released a small culture of bacteria onto the human, through dispensers in its legs.

This colony of bacteria, which was deposited on the human's neck, brought itself out of its stationary phase and into its lag phase. The bacteria began to get accustomed to its new environment. It began processing dead skin cells on the human into nutrients and amino acids which it would use later for growth.

A couple of hours after the bacteria found their new home; they accumulated enough resources to shift into their log phase. During this phase, each bacterium began to make a copy its artificial DNA. Once the copy was complete, the two separate DNA strands went to opposing sides of the bacteria cell. Once on opposite sides, the cell then began to divide itself down the middle and slowly pull itself apart until the two halves were completely separated. In a matter of fourteen minutes, the bacteria colony had doubled in size. Fourteen minutes is its generation time.

About an hour after the log phase ended, the human happened to scratch his neck where the colony was located. In doing so, several thousand bacterium were transported to the fingertips of the human. The bacteria continued their processes, accumulating resources and preparing for another log phase. By the time the human was getting ready to leave work, the bacteria on the human's fingertips had doubled in size.

As the human walked out of his offices, he left behind thousands of bacterium everywhere he touched. The final place that he left traces of the bacteria was the elevator button to the ground floor. The bacteria on the elevator button entered their stationary phase, as there were no resources available to prepare for another log phase.

A few minutes later, another human entered the elevator and pressed the same button. The bacteria that were transplanted onto the new human immediately entered a lag phase so they could build up more resources. By the time the human made it to her house, the bacteria were well into their log phase and were about to double in numbers. By the end of the evening the human had spread the bacteria throughout her house. The bacteria that remained on her body however, were killed off when she took her shower.

The next morning, as the human got ready for work, she picked up some bacteria as she touched the very same things that she had deposited the bacteria on the evening before. While at work, the bacteria spread, not just over her, but also through the offices where she worked.

For several days, the bacteria with the activated biomarker spread around the researcher's office and home. With the bacteria well on its way to spreading everywhere, the researcher received a visitor, an analyst from the lower office who wanted to see the prized specimen on the operating table. When the analyst arrived, the two shook hands. The bacteria with the activated biomarker spread to the analyst, who after concluding his visit returned to his office.

The Administrator went inside his house and was promptly greeted by his two girls and his wife. While giving them all hugs hello, he spread the bacteria with the activated biomarker to all three of them. The bacteria began eliminated the other bacteria on the three new hosts, including synthetic bacteria without the activated biomarker, which had spread to them when the gnats first set up their patrol zones two and a half months back.

This time the gnat did not return to its patrol, instead it flew to the artificial hummingbird that was posted on a branch of the nearby tree. With the mouth of the hummingbird still open from when it arrived, the gnat flew straight inside and went to a biochemical communication terminal. The gnat then secreted a pheromone and rubbed it onto the terminal sensor.

Across the galaxy, Superhova received the message and promptly started to contact Waylien.

"Waylien, we just received a transmission from Earth. Starrburst and Tuspace are being held in the World Order HQ," Superhova said, once the connection was established.

"Then this war is about to begin. I will inform Gamesh and he can make an official announcement tomorrow," Waylien replied.